Currently we are experiencing dramatic increase in public dissatisfaction with the forces of globalization and the resulting worldwide upheaval of traditionalism, conservatism, and populism in political discourse, including calls for protectionism and isolationism in both economy and international relations. However, there are some areas where globalization is irreversible, while such calls are muted. Paradoxically, those who oppose globalization rely primarily on those same information technologies, communication means and social networks that bring around globalization. At the same time, globalization and more concretely global spread of information technologies, along with the growing market demand for these, create the challenge of how to better serve clients and communities with different linguistic and cultural backgrounds in increasingly competitive and demanding international markets.

Two catchwords that refer to mutually complementary approaches dealing with this challenge are ‘localization’ and ‘internationalization’. And sometimes, when pronounced by IT professionals, these rather familiar but context-specific words may need some explanation as to what they exactly mean. It becomes even more difficult when these terms are replaced by strange code-words (in scientific Volapük called ‘numeronyms’) such as ‘L10n’ and ‘i18n’, where 10 and 18 are respective numbers of letters between the first and the last letters in these words. 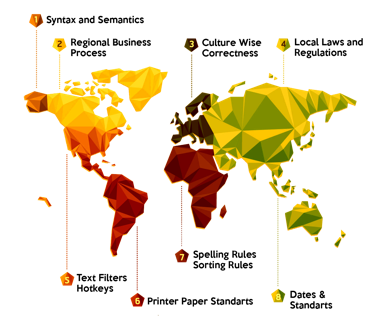 Localization refers to the adaptation of a software product, application, hypertext or document content in order to meet the language, cultural and other requirements (such as keyboard usage, currency, symbols, metric systems and data formats, or legal requirements), of a specific local market (or ‘locale’). When a globally marketed product is localized, the process is called – ‘glocalization’. The most widespread form of glocalization is of course language localization.

However, in order to make glocalization possible, the respective product should be ‘internationalized’, which means that it (such as a software application) should be designed and created in a way that it can be potentially adapted to various languages and local parameters without any essential structural changes, other than adding needed locale-specific components and translating respective texts. The possibility of effective localization relies on adaptability provided by internationalization, and these two concepts are intrinsically coupled, even though somewhat asymmetrically. Indeed, internationalization does not necessarily imply localization, just its possibility. Internationalization normally implies separation of localizable components from source code or content by splitting potentially locale-dependent parts into separate modules, so that localized options are easily introduced without the need to redesign the product for every new locale.

Re-adapting and re-engineering a deliverable product for a global market is obviously more difficult and expensive than internalizing it in advance as an essential principle of the design and development process. Internationalization, or i18n, should enable a product to be used with multiple scripts, regional specificities, and cultures, dubbed its ‘globalization’ (g11n). In more concrete terms it would as a rule imply enabling Unicode, or otherwise ensuring character encoding as needed, but also developing multilingual software and enabling national language support, also taking into account local cultural preferences – e.g. local date/time formats, metric and numeral systems, forms of personal names and address, sorting and presentation of various lists, among other things.