The impact of a universal auxiliary language on the world

An airport can sometimes feel like a modern-day Tower of Babel, and the effect of a universal auxiliary language there is crucial. 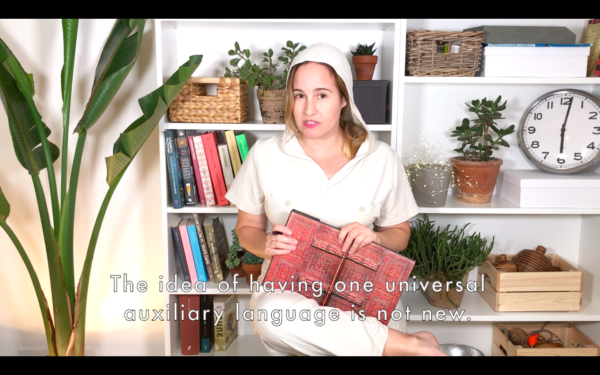 Foreign words linger in the air, and the effect of a universal auxiliary language is present!

People exchange sheepish, hesitant looks that say, “Where are you from?” before trying to speak.

You learn a few words in Croatian to at least thank the airport official in his native language, only to find out he’s Ukrainian.

What do you do if you accidentally bump into someone at a German airport?

Try your hand at apologizing in German or default to English?

But what if the person speaks neither?

It’s enough to make you neurotic.

➤ You might be smiling right now because this sounds all too familiar.

All bets related to a universal auxiliary language are off here.

There is no protocol.

All the social norms that give you a sense of security at home are flipped upside-down.

It makes you wonder, what would happen if we had a universal auxiliary language? We do.

Too many of them. Esperanto, Volapük, Interlingua.

Movements for an international auxiliary language

The idea of having a universal auxiliary language is not new.

After all, the benefits of having one global language are clear.

Imagine a world with no language barriers, no miscommunication.

For centuries, the languages of dominant societies have become the lingua franca, the go-to languages for international communication.

During the rule of the Roman Empire, for example, Latin was the standard language for trade and commerce in the Mediterranean region due to the empire’s sheer economic and political power.

This situation has continued to evolve with the changing tides of the international arena.

→ Nowadays, some people would argue that English is becoming the lingua franca of the modern world.

More on that in a minute ↓

Not surprisingly, people often meet lingua franca with a certain amount of resistance.

Who wants a foreign language imposed on them simply because a particular region has the upper hand economically or politically?

The adoption of lingua francas has sometimes been interpreted as a form of cultural imperialism, stripping away the cultural individuality of less powerful regions.

For this reason, linguists have tried to construct an artificial auxiliary language.

They tried to construct a code:

This language doesn’t mean replacing others but functioning as a global communication tool.

During the 19th-century, a surprising number of international auxiliary languages bubbled up.

We wanted to narrow down our language choices and ended up with more than we bargained for.

We can be sure that the lack of a single international auxiliary language is not due to a lack of trying.

While we might all argue that our mother tongue is the most straightforward language globally, linguists might suggest that Esperanto holds the #1 spot.

Reportedly, you can learn Esperanto in only one-third to one-fifth of the time it would take to learn any other auxiliary language.

Even Duolingo has boarded the Esperanto bandwagon, providing the opportunity to learn this made-up language alongside some of the more traditional ones like:

Sadly, Esperanto still has not caught on.

We would be speaking it in airports instead of resorting to charades if it had.

English as a global language

Barring any international consensus on an auxiliary language, it looks like our society will continue to function according to the lingua franca paradigm for a while.

Nowadays, it appears that economic success determines what languages rise to prominence in the international realm.

This fact explains the modest boom that German has experienced in Europe.

Decades ago, schools taught French as a foreign language; nowadays, German has risen in popularity, a practical consequence of the changing economic tide.

But if you had to choose one, what would you say is the universal language?

Most people would say English.

If you live in any non-English-speaking European country, you’re probably familiar with the recent English craze.

Everyone wants to learn English for three main reasons:

This preference seems natural, considering that:

Proponents of the Basic English movement have responded to this universal tendency by trying to adopt a neutral form of English for general use, one without regional differences or slang.

But is English the most effective choice for a global auxiliary language?

Some linguists point out that irregularities in spelling and pronunciation don’t make it a natural language to learn.

Yes, English has already gained a foothold, but would it be feasible to continue to spread it as the standard language throughout the world?

There is no easy answer.

Nevertheless, it does seem that English has become the de facto international auxiliary language—at least for the moment.

Is English experiencing its 15 minutes of fame as a universal language, or is it here to stay?

Only time will tell.